On 22 March 2017, Bosnalijek hosted postgraduate students from the prestigious American university Yale. As part of their trip, the students showed great interest in visiting the largest pharmaceutical company in Bosnia and Herzegovina. 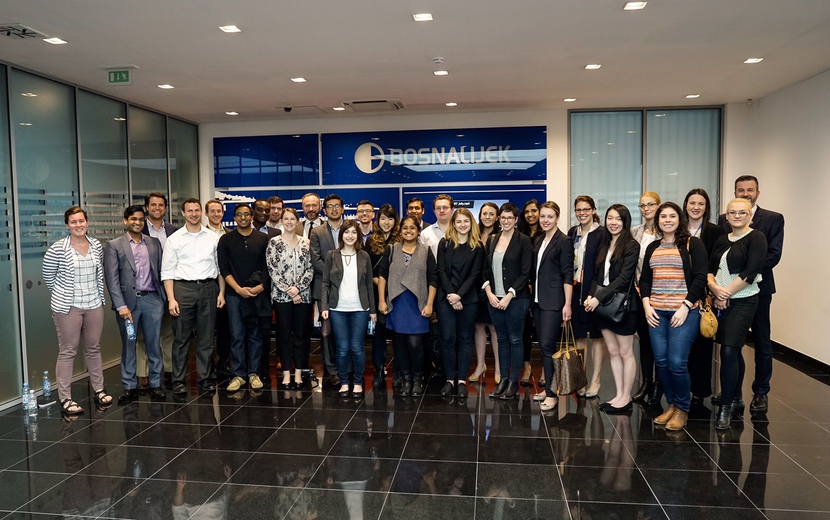 Ivana Katić, who is a professor at Yale University and the organiser of this student trip, emphasised to the media that, "Bosnalijek was chosen as one of the most promising local companies. It has a positive story. This company survived a dreadful war in Bosnia and its business is quite successful nowadays, being in expansion both in the surrounding region and globally. Our students found it very interesting to see that women are greatly represented in many positions in the company, from the lowest to the highest rank, which is not the case in the United States of America for example.”

Kenan Kekić, Marketing Manager for the Bosnia and Herzegovina region, informed media representatives that, "We are really delighted to host a delegation from the Yale University, which is one of the three oldest universities in the USA. We presented our company, our business plans and production to the students.”
After the presentation and a short corporate film, numerous questions about Bosnalijek were put to Ekrem Turajlić, Corporate Sales Department Director, Kenan Kekić, Marketing Manager for the Bosnia and Herzegovina region, and Aleksandra Karamehmedović, Human Resources Department Director.
Kenan Kekić stressed that, "Despite the fact that one hour had been foreseen for discussions we actually stayed much longer. It was really fascinating to see the amount of information the students had about Bosnalijek and how well they were prepared for today's visit and the discussion with the representatives from our company.”
Sara Vračar, a student at Yale University, who is originally from Banja Luka, described the impressions of her colleagues at the end of this visit.
"I think they really had a chance to see everything they were interested in. They were interested in getting to know about this company as much as possible and to learn about the pharmaceutical market in Bosnia and Herzegovina. In our visit to Bosnia and Herzegovina, I can say that the largest number of questions was raised here in Bosnalijek and that they really had an excellent experience. We definitely found the greatest pleasure here at Bosnalijek”.
Andrew Augustus, another student and Sara's colleague at Yale, added that they were quite satisfied because they had had the opportunity to talk to Bosnalijek management about sales, marketing and human resources.
"We really learned a lot about this company from many angles. We saw the manufacturing process, sales strength and it was quite a fascinating experience for us. We could see the way in which the entire company functions from the beginning to the end.”
The visit of these students from Yale University is just one of many activities at Bosnalijek over the recently period. During the previous week, representatives from the Turkish Ministry of Health paid a visit to the company in order to perform a GMP audit and family medicine representatives from Southeast Europe will arrive on Friday.